UNITED FAIL TO SHINE TO ROUND OF SIXTEEN. 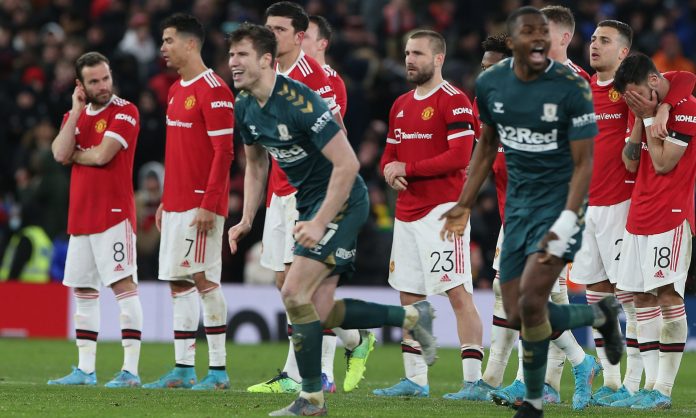 A missed penalty, rounds of wasted chances and opportunities and failure to deliver was enough to send Manchester united out of the FA cup round of sixteen at their own home ground, Old Trafford

The top tier team which was in the favor to win in the late night show turned out a horrible knock out as top notch players lost open chances to score and to deliver what was expected of them.

The game ended with a a one-one draw. Jadon Sancho opened up the scoring panel at the 25th minute, this is after Cristiano Ronaldo missed a spot kick. This was after Paul Pogba was fouled in the Middlesbrough’s box.

Later in the 64th minute Middlesbrough scored a controversial goal which was allowed. This was despite protests from the fans and the players that it was a hand ball. The VAR ruled out the allegations forcing the one-one draw. At the end of the ninety minutes still the players bore no fruits. This forced the game to be extended by further thirty minutes so as to find the absolute winner.

After the thirty minute mark, the game was still stale and this forced the game to a penalty shoot out in which Manchester United lost. This was on an aggregate of 7-8. Manchester united youthful Anthony Elanga missed the spot kick.This saw Middlesbrough advance to the round of sixteen.

With this in play sanction has been urged to change either the Manchester united players or the tactics of player in order to bare fruits. Manchester United are doomed to fail if they continue with their play structure and failed amounts of deliveries