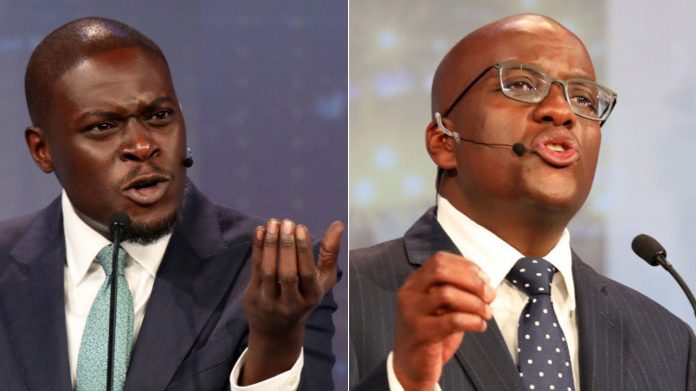 The auditorium at the Catholic University of Eastern Africa (CUEA) literally became a ‘battlefield’ on Monday night, as each of the top Nairobi gubernatorial candidates sought to impress the 2.4 million city voters during the much-anticipated debate.

Like in a wrestling ring, United Democratic Alliance (UDA) candidate Johnson Sakaja and Polycarp Igathe of Jubilee Party which is under the Azimio La Umoja One Kenya Coalition went on each other’s weak areas, in a clear race to outsmart each other as the August 9 City Hall race nears.

From Sakaja’s contested credentials to Igathe’s move to quit as Deputy Governor months after his 2017 election “when the ‘kitchen’ got hotter”, it was an all out clash for the duo.

A bare-knuckle contest over the management of Kenya’s capital, a major contributor to the national budget, ensued with time seemingly being insufficient for Sakaja to elaborate detailed responses that appeared to shutter Igathe’s solo head start in the debate owing his opponent’s late arrival.

“I wanted to give Igathe a head start. He is used to getting it from the State,” Sakaja fired back in opening remarks when pressed about his late arrival at the debate.

It is however Igathe who threw the first political jab after he said he would run Nairobi in a dignified manner, “unlike people who arrive for interviews late.”

Sakaja’s qualification was at the center of the debate and specifically whether he really holds a genuine degree certificate.

However, on Tuesday morning the High Court dismissed a petition challenging the validity of Sakaja’s academic qualifications due to lack of evidence.

In his ruling, Justice Anthony Mrima indicated that the Independent Electoral and Boundaries Commission (IEBC) did not err in clearing Sakaja.

Justice Mrima further stated that it is the responsibility of the parties to prove allegations they bring before the court even as he slapped the petitioner with costs.

Sakaja had during the debate on Monday put a fierce defense on his education credentials, dismissing his opponent Igathe as a State-backed project focused on his papers as a ploy to divert public attention on issues facing city residents.

The Senator accused the State of orchestrating his woes in a bid to stop him from being on the ballot.

“I pity my opponent because his strategy was premised on me being locked out of the race. My degree was certified by Commission for University Education having conferred with the sister agency in Uganda,” Sakaja said.

Sakaja had his armory fully stocked and never shied away from reminding Igathe that he quit on the people of Nairobi in 2018.

“Maybe things would have been better if you never quit on the people of Nairobi,” he said.

Igathe quit office after 6 months as a Deputy Governor under the administration of Governor Mike Sonko, who was later impeached in 2020.

“I didn’t earn the respect of my Governor. I don’t blame anyone, I blame myself,” Igathe said.

Sakaja insisted that Igathe can easily give up on the city residents if faced with a myriad of challenges.

“This city needs resilience, if you cannot withstand the heat of a deputy governor, you cannot run the city,” he went on.

“I am my own man and I am looking forward to meeting my worthy competitor at the ballot,” he said.

Igathe banked on his wealth of experience in the corporate sector to sell his candidature.

He would however be “schooled” on some areas by Senator Sakaja, including on the question of how much water Nairobi needs and what it gets.

Igathe poked holes on Sakaja’s performance as senator in his oversight role as he claimed that the county was underfunded under his watch.