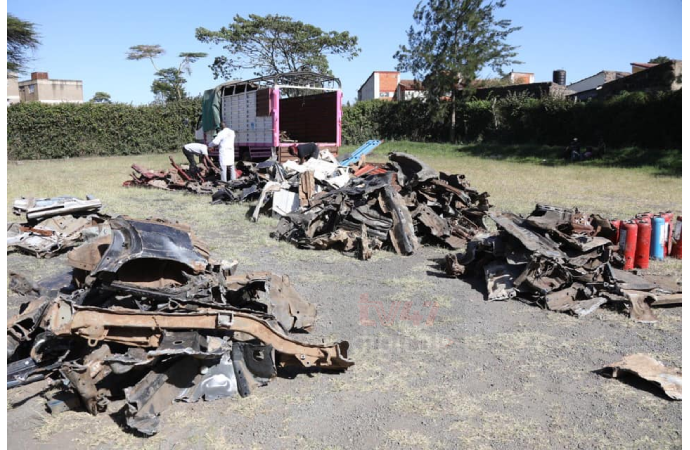 Police in Nairobi are in hold of a truck driver who was found with a lorry fully loaded with car parts which were believed to be stolen.

According to a press statement released by the DCI, Mr. Moses Ndegwa, the truck driver was arrested following a tip-off on the disappearance of three vehicles

The tip off indicated that the cars had been driven to a scrap yard in the Kariobangi area. Near the Light Industries before they were hurriedly dismantled by a standby pool of mechanics.

The group of highly skilled craftsmen hurriedly dismantled the vehicles under the cover of darkness. By 4.am in the morning, the work had already been finished.

The witty mechanics did not leave anything behind that would set them up.

It would take a genius mind to reach an esteemed decision that the vehicles were indeed chopped off before being transported.

No one Knew the all day welding center would turn out to be a night dissembler for stolen vehicles.

Police pounced on Ndegwa as he was preparing to leave to an unknown destination which is believed to be along the Mombasa road.

The Lorry was diverted to the BuruBuru Police station where the load was offloaded, as the suspect is being grilled by the DCI and waiting to be arrained in court over theft.

Perhaps this answers the over years disapearance of high end cars.