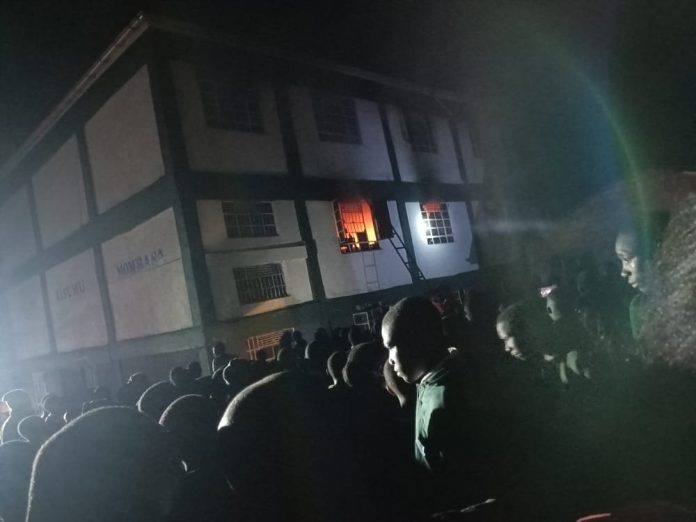 One of the dormitories in Nyamira boys high school was on Saturday night destroyed by fire, forcing students to spend the night in the cold.

The costly nightly fire is estimated to have started at around 9:30 pm, students were forced to rescue themselves but did not manage to rescue their belongings.

The cause of the fire is yet to be established, as the school’s administration has not issued an official statement on the incident.

This comes barely twelve hours after another fire incident was reported at Kakamega boys high school in the wee hours of Saturday morning.

Villagers living nearby, students, and the Nyamira county fire response team joined hands and managed to control the fire.

The school is located in Nyamira south sub-county has become the third institution to be razed down in the recent school fires around the Gusii region, this is after two other learning institutions were razed down last week in the same region.

Currently, more than thirty-four secondary schools have been razed down in what is seen as unrest among students over reasons which are yet to be established.

Education Cabinet Secretary Professor George Magoha announced that all school will have a five days mid-term break which will commence on the 19th of November. He added that despite the pressure to close all schools immediately, he won’t give in urging all teachers to stick to the school calendar.

Kakamega Governor Wyclife Oparanya while addressing the media said that the government should not condone such unruly behavior adding that those students found responsible for such acts should be jailed for 60 years to serve as an example to others.

This has cause a debate online, Kenyans expressing divergent views on the matter with some proposing that boarding schools be abolished to avoid such occurence.