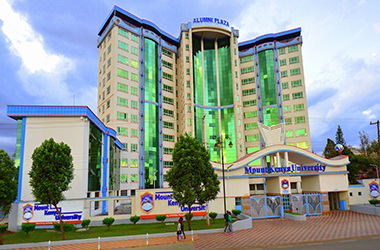 As Institutions of higher learning continue to grapple with finances and most of them now running into debts, Mount Kenya University has developed a ten-year strategy that will see it diversify its sources of income besides student school fees.

The latest inventory in the university’s is the new ultra-modern convention center that was recently launched by interior Cabinet Secretary Dr.Fred Matiang’i.

The 2000 seater center also has seminar rooms and conference halls which the university seeks to tap to stream more revenue. The center named after former President Mwai Kibaki will also be at the disposal of the students for their campus affairs.

The university also established a new eatery at an estimated cost of Ksh20 million which seeks to serve staff and students while also allowing hospitality students to train and sharpen up their skills.

The eatery located in the university’s alumni plaza is also part of the institution’s strategy to diversify revenue streams in the coming years.

MKU has also developed public-private partnerships within Thika town aimed to help the public while also serving the interests of the students and the university.

Their recent partnership with Thika High School to revamp and maintain their sports ground which will now be in use by both schools and the public, MKU has also partnered with Thika level five hospital and General Khago funeral home to enable medical students to get the practical bit of the course while also improving the services at the facilities.

MKU founder Prof. Simon Gicharu has been at the forefront in establishing a rapport with other organizations aiming at building networks that would benefit the institutions and students. Another major establishment under the umbrella of the institution is TV47 which apart from entering the media market seeks to give media students in the school platforms for internships and further their training in the field.