HomeENTERTAINMENTExclusive: Why Cardi b shared the Kibaki video on her timeline
ENTERTAINMENTFASHIONFeaturedNEWSRELATIONSHIP

Exclusive: Why Cardi b shared the Kibaki video on her timeline 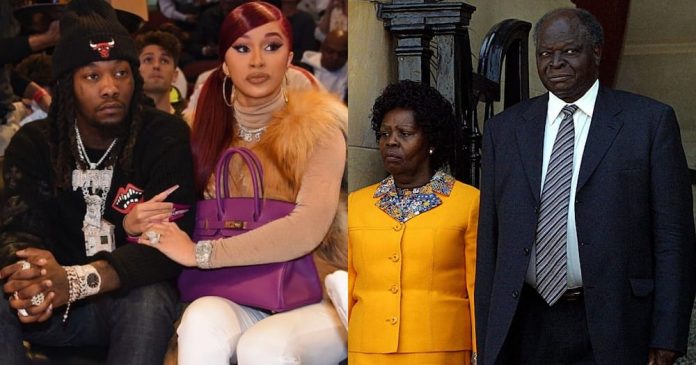 The video of Kibaki and his late wife Mama Lucy, dated 3rd March 2009 caught the attention of Cardi B more than a decade later. In the video, President Kibaki had called a press conference to declare that he had only one wife, Lucy Kibaki.

“I want to make it very clear that I have only one dear wife, Lucy, who is here. And I do not have any other, ask any question I will reply,” Kibaki said in the presence of Lucy.

This was after numerous reports that former Othaya MP Mary Wambua was Kibaki’s second wife. She shared the short video with an emoji caption. But why would Cardi B relate to such an old video?

The singer related to the video because she has been in the same situation as Lucy Kibaki. Her husband, Offset has been rumored to be having pre-marital affairs. The cheating scandal went public in 2019 and 2021.

In both cases, Cardi B threatened to walk out but remained. With the Kibaki video, the mother of two could be telling side chicks that Offset has only one wife, Cardi B.